Another great thing about the Citrus Swirl is it has a mascot.  ORANGEBIRD!  Orangebird was created by Walt Disney World for the Florida Citrus Commission to promote Florida Orange Juice.  In exchange, the Florida Citrus Commission became the first sponsor of the Enchanted Tiki Room.  In the early days of the Magic Kingdom, Orangebird even walked around Adventureland to meet guests.

Orangebird disappeared from the Magic Kingdom when the Florida Citrus Commission and Walt Disney World distanced themselves from Anita Bryant during the late 70s.

Another fact about Orangebird is that he never talks only thinks in thought bubbles.

We have the Japanese and their Orange Day Festival for the return of Orangebird.  Guests to Tokyo Disneyland became enamored with the character and over time that demand came to the United States and Orangebird made his return the Sunshine Tree Terrace and has the mascot of the tasty Citrus Swirl.

And when you bring an Orangebird home with you, he doesn’t like snow. 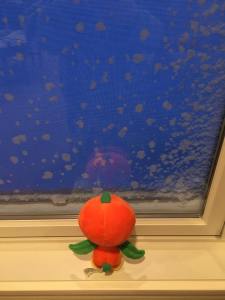 For more frozen treats at Disney,
check out the other great posts from the Blogorail!

3 thoughts on “Ode to the Citrus Swirl”