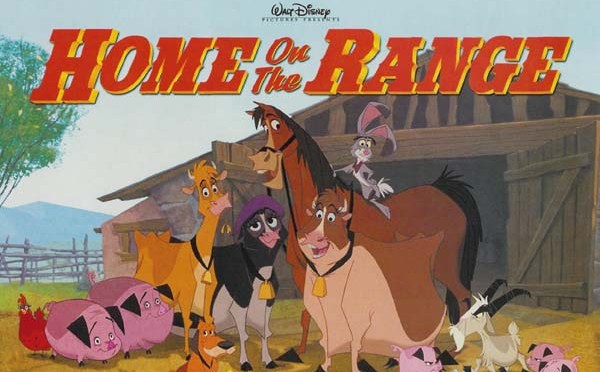 What do you get when you combine a big-name cast, lots of story artists, production delays, and a poorly put together plot?  You get this week’s Animation Monday movie: Home on the Range.  This movie was heavy with name actors (Rosanne Barr, Dame Judi Dench, Jennifer Tilly, Cuba Gooding Jr., Steve Buscemi, and Patrick Warburton).

Those name actors came with a big salary to voice a variety of farm animals.  All of the actors had their own supervising animator.    All of this for a movie about farm animals trying to save the family farm.  If I seem to be harping on that point, it is because it is far removed from the typical Disney movie plot.  It’s not a princess movie.  It’s not a movie where the someone has to be saved, though, it can be argued that the someone, in this case, is the farm. 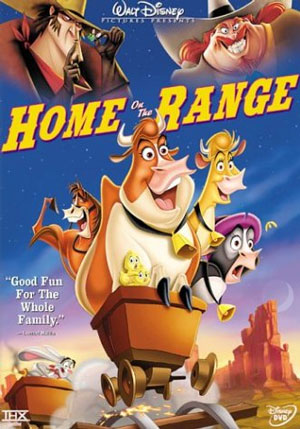 A movie that most critics panned.  “Didn’t have crossover quality…..lacks freshness and originality…kids will like it, their parents will be looking at their watches.”  The one bright spot for parents who looked at their watches was that the film was only 76 minutes long.  The downside for Disney was a movie that was over-budget but that people did not want to go see.  Budget: $110 million (?!?!?!?!), Box Office: $103.9 million.  The lack of crossover quality or timeless-ness hurt the movie since that lack of box office couldn’t be made up in sequels, rentals, or VHS/DVD purchases.  Home on the Range was the last Disney animated film that was released primarily on VHS.

There is no place in the Disney family of parks where you can see or meet characters from Home on the Range.

3 thoughts on “Animation Monday: Home on the Range”