The Hunchback of Notre Dame is this week’s feature movie on Animation Monday.  The movie was released during what is viewed now as Disney’s second decline in animated movies.  Things were starting to move from hand-drawn animation to computer-aided and then finally computer-animated movies.  Given the size of Disney’s animation department, Disney was slow to adapt to this change.  The Hunchback of Notre Dame was released in 1996 when hand-drawn animated movies still had a place in theaters.  Like Mulan and Hercules, it was a box office success.  The film grossed $325 million on a budget of $100 million. 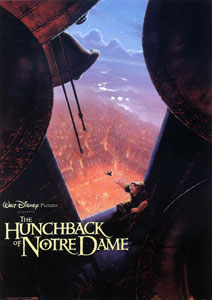 The cast and fantastic story-telling helped stall the second decline in Disney Animated films.  The cast was headed by Demi Moore who voiced Esmeralda, Kevin Kline – Captain Phoebus and Jason Alexander who voiced one of the statutes that were Quasimodo’s best friends.  Tom Hulse, who was nominated for two Oscars for his portrayal of Mozart in Amadeus, voiced the main character Quasimodo.  A very solid cast that helped this movie and Disney films stay out of decline.

One of the other features that critics and viewers both liked about this movies was the great detail that went into Notre Dame.  The directors and art team actually spent two weeks in Paris and received multiple private tours of the passageways and tunnels that make up the inner-workings of Notre Dame.  They also spent time visiting historians of Victor Hugo to discuss his novel and understand what Hugo’s direction and motivation for writing the novel and how best to translate that into an animated movie.

The crowning work of this movie was the musical score.  Alan Menken was nominated for an Academy Award.  The musical score was nominated for Best Music, musical or comedy score, where it lost to Emma.   However, it marked Menken’s first loss in this category in five tries after winning awards for Beauty and the Beast, Aladdin, The Little Mermaid, and Pocahontas.

Is there any mention of this film in the parks?  I have found no direct mentions or references to the film in the parks even in the France pavilion of EPCOT which would be the most obvious place to find one.

If you have seen any of these characters in any of the Disney parks, feel free to share them here.