The processional was just one part of the Magic Kingdom’s Christmas festivities.  Town Square in 1971 featured a 50-foot Christmas Tree and there was a special holiday parade which ran daily from December 10th to January 2nd.  The Candlelight Processional was a two-night affair on December 18th and 19th with the show starting at 6 pm.  The narrator in that first year was movie star, Rock Hudson. 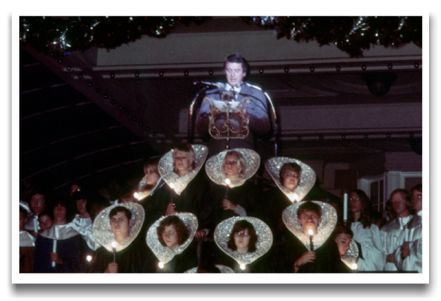 Christmas at Disney has come a long way since that first Walt Disney World Christmas in 1971.  Now, we have Mickey’s Very Merry Christmas Party which starts in November, Christmas Around the World at the EPCOT World Showcase, the Osborne Family Spectacle of Dancing Lights at Hollywood Studios with the Candlelight Processional still taking place in the American Gardens Theatre in EPCOT.

Information for this article was pulled from: