My trips to Walt Disney World have come in two phases.  The first phase was during the late 70’s and early 80’s when there was just Magic Kingdom and EPCOT.  The second started back in 2009 when my wife and I took our daughter on her first Disney trip.  It was also my first visit to Hollywood Studios and Animal Kingdom.  I never knew what Hollywood Studios was like without the Sorcerer’s Hat in the middle of the park. 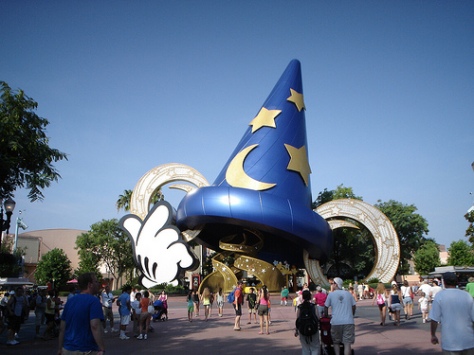 To me, the Sorcerer’s Hat was a meeting place in the middle of the park.  An easily identifiable location for both the old and young members of a party.  A default meeting spot if the group got split up.

Come tomorrow, the hat will be slowly taken apart and removed from the park.  Some people will rejoice in the removal of the hat as the park is returned to it’s more natural state and the Chinese Theater will be seen, once again, from the front of the park.  It will give the park a more open appearance.  The hat makes the hub of Hollywood Studios seem crowded with a lot of clutter.

The removal of the hat can be viewed as Phase 1 of the larger plan for Hollywood Studios.  Phase 2 should come in the form a rumored Pixar Place expansion with a possible Phase 3 of a rumored expanded Star Wars area.  The removal could be just one step in the picture of a larger expansion/refurb to the Hollywood Studios park.

However, for me, the park will never look quite the same.  There will also be a hole in the center of the park where an icon to one of Disney’s greatest movies sat….an icon which will not be missed by a lot of people but will, also, not be forgotten.