I’ve gone on this attraction once.  NEVER AGAIN!  I can’t think of one redeemable quality to this attraction.  The seats are uncomfortable.  The show is too long.  I feel like I’m trapped in a show run by a nine-year boy.  No offense to nine-year boys but I don’t need an entire attraction that involves jumping up and down on my shoulders along with burp and flatulence jokes.

I would like to see anything “future-y” to take the place of Stitch’s Great Escape.  Something that, I think, would be fun is a Space Shuttle/International Space Station simulator type of ride.  Guests could experience the shuttle taking over and docking with the ISS or Hubble telescope.  The simulation would conclude with a space walk and then re-entry.  The best way to describe this hypothetical is Mission: Space – Yellow (not as tame as Green but not as thrilling as Orange) meets Soarin’.

I’ve seen this movie a couple of times.  However, the movie will be 20 years old in January.  As a result, the movie is starting to show its age.  It’s a nice diversion type attraction if you happen to waiting for a Fastpass window to open.  It can kill some time.  But it’s not an attraction that a guest would seek out and carve out time to see in a “touring plan.”

This attraction is in need of a refurb not a complete re-imagine.  Some of environmental concepts and how people can save the planet can be updated since what was in vogue in 1995 is probably not in vogue in 2015.  Update the concepts and keep the characters from The Lion King to tell the fable during the movie.

I’ve tried in this “must-do” and “must-don’t” list to keep things general.  However, this is a personal addition.  Tower of Terror is on my “must-don’t” list until they change the concept of the attraction.  Tower of Terror takes one of my greatest fears – an elevator malfunctioning and then falling to the bottom – and turning it into an attraction.  I do not need to be going on attractions which bring my greatest fears to life.

That said, I know lots of people enjoy this attraction.  More power to them!  You just won’t see me in the line waiting to get on the attraction.  I’ll be taking another trip on Star Tours or catching Muppetvision 3D! 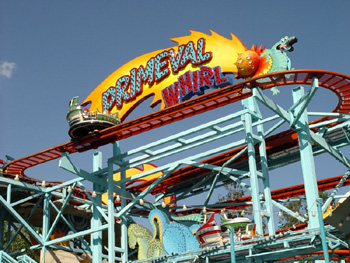 Ideally, I’d like to complete redesign all of Dinoland USA and make it fit better within the general safari theme of Animal Kingdom.  Since I can only choose one attraction that attraction is Primeval Whirl.  I’m not a fan of the “mouse trap” style of roller coaster.  I find them to be very “herky-jerky” and I need a trip to the chiropractor when I’m done with the attraction.  That makes Primeval Whirl an attraction that I just can’t recommend to people.  I’d rather spend my time going on Kilimanjaro Safaris or going down Kali River Rapids.  There are other attractions where guests can better spend their time in Animal Kingdom.