Many sources are reporting that Disney and Norway are having disagreements as to who should pay for any refurbs and upgrades to the Norway pavilion at EPCOT.  Disney is asking Norway to pay $9 million to keep Norway in the Norway Pavilion at EPCOT.  If Norway does not pay the $9 million, Disney will go ahead with plans to convert Norway into the Kingdom or Arendelle with a much smaller Norwegian presence in the pavilion.  This leads me to today’s question, who should be paying for the refurbs and upgrades to the Norway pavilion?  At the end of the article, please take the time to answer our poll question with your opinion.

As always, I will try to look at the argument from both sides before coming to my decision.

From Disney’s perspective, the Norway pavilion (along with a few other pavilions) are in need of some refreshing.  When these pavilions were built originally, they were built on the funds of the sponsoring country’s tourism bureau.  Those funds allowed the country to work the Disney Imagineers and create a concept, layout, and any attractions for the country.   After that, it is nothing but free advertising for the country.  Disney pays for all of the routine maintenance of the pavilions.

It was a great deal for country since they probably made that low “buy-in” cost back with people making trips to the countries based on the pavilion’s presence at Disney.  There have not been any subtractions to the pavilion line-up at EPCOT so these countries have had an EPCOT presence since 1982.  A few million dollars for 30+ years of free advertising for country.

Disney allowed the tourism bureaus to put in the films, attractions, etc. because they were the ones to foot the bill.  However, I’m sure there was the expectation from Disney’s end that these films and attractions would be kept up to date which, for the most part, they have not.

Canada, China, and Mexico have all updated their attractions in the last 10 years.  The United Kingdom, Germany, Italy, and Morocco do not have attractions or films in their pavilion.  France has not updated their film since the park opened in 1982.  Norway has not updated Malestrom since the attraction debuted in 1988.  The American Adventure has been the same basic film since 1993 with updates made in 2001 and 2007.  Japan goes with a rotating exhibit of arts from the country.  For Disney, some of the countries have been more vigilant at updating their country’s attraction than others.  Canada’s update came on the heels of lots of complaints to the Canadian Tourism Bureau about how Canada is portrayed in the O Canada! film.

From that perspective, I can see Disney asking Norway, in general, to upgrade their pavilion since it has gone over 25 years since it’s attraction was updated.  However, the same requests should be made to France as well since they have never updated their film in the entire history of the park. 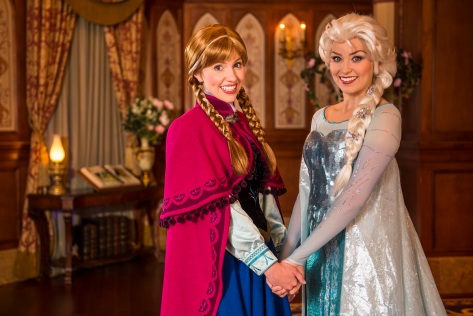 Disney has not used these “strongarm” tactics to hold another pavilion hostage over how it’s country is portrayed like they are with Norway.  Even though, Arendelle is highly based on Norway maybe Norway doesn’t want that to be it’s public face in EPCOT.  It’s currently the Norway pavilion in EPCOT not the Disney portrayal of Norway at EPCOT.  Norway probably already feel “invaded” by Disney with the princess meal where none of the characters have a connection to Norway.

Norway has to be asking itself how much it’s willing to give.  But on the other hand, Norway also understand that whoever pays the money for the upgrades and refurb has control over what the upgrades and refurbs will look like.  There are plenty of former sponsors of attractions at other parks.  But those were businesses not countries.  Norway only has to look across the World Showcase at France to see another country which has done nothing to upgrade it’s attraction in 32 years.  “Why isn’t Disney using the same tactics with France as they are with us?”  Norway is probably asking itself.

Who is right in this debate?  I am going to side with Norway in this debate.  EPCOT is used by many people as one of the few educational opportunities within Walt Disney World.  The World Showcase is place where people can travel around the world and learn about different countries and cultures that they may not have the opportunity to do.  EPCOT is a place where a person can try to escape the parades, the overt character meet and greets (yes, there are character meet and greets in EPCOT but outside of the Character Spot, they are not well advertised), and the Disney movie and Disney Channel machine.

If Disney gets to turn Norway into the Kingdom of Arendelle, this goes against everything that EPCOT was built upon.  It’s a slippery slope that Disney should not be going down.  If this happens, what’s next.  Does Germany get turned into the forest from Snow White?  Will Remy be turned loose in France?  Will Merida and Mary Poppins fight to see who rules the new United Kingdom?

However, Norway should understand given the basic agreement for the pavilion….those who pay for the pavilion get the right to design the pavilion.  If Norway does not pay, they should not expect to see Norway has they envision it.  It will get turned into the Kingdom of Arendelle with enough Norwegian culture and hopefully the bakery kept only so the pavilion can continue to be called Norway.

What’s your opinion.  Vote in our poll below:

The Dad For Disney Facebook group is over 350 members strong.  Thank you for your continued support.  Please tell your friends, family, and co-workers about this growing group.